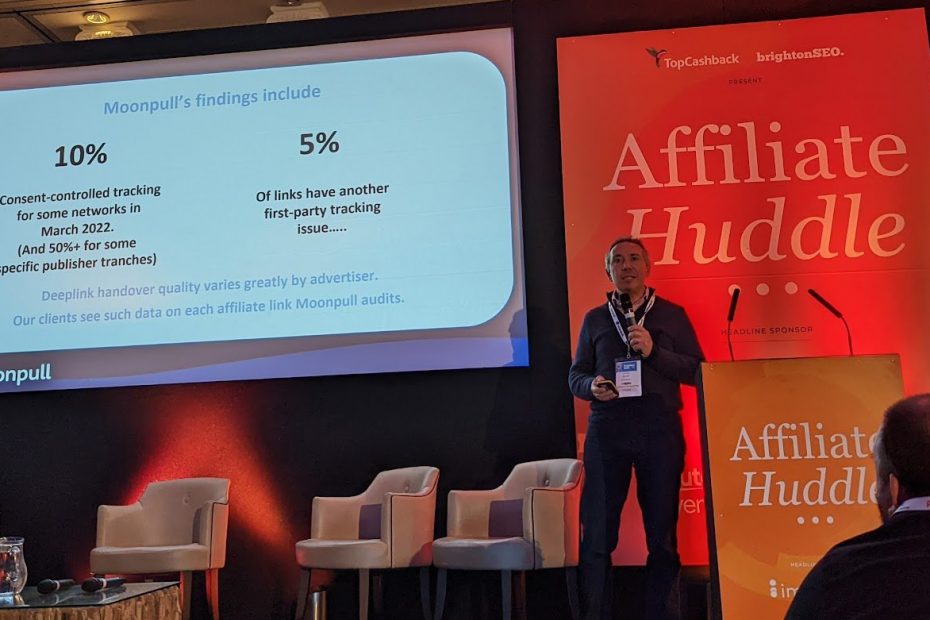 at the 2022 Affiliate Huddle in Brighton, as the ‘Innovation Spot‘. Steve highlighted the issues that have come to light during over a year’s analysis of multiple advertisers and affiliate networks.

Moonpull analysis across hundreds of user journeys has been designed to identify where issues are happening in the ‘handover’ from publisher through to advertiser websites. These vary from network to network and advertiser to advertiser.

There’s an old adage of “50% of my advertising is wasted, trouble is I don’t know which half”. That was attributed to John Wanamaker over 100 years ago – but still seen as relevant today.

For affiliate marketers we could re-hash that as 5% of my sales go untracked, trouble is we don’t know which ones. As any publisher will tell you, that’s not too far from the truth.

this is what Moonpull solves. We can tell you which advertisers and which links leave income on the table.

And because it is revenue off the top line, it’s profit off the bottomline. Thus the impact is much more serious than misunderstood advertising.

Moonpull specifically audits the ‘handover’ from publisher to advertiser.

So is a referred user who’s arrived at the advertiser’s landing page enabled to lead to commission for the publisher where a conversion happens? Moonpull doesn’t go as far as looking at the confirmation page code but does provide a technical explanation based on the cookies in play during that handover.

And such matters are worse for deeplinks.  Some advertisers can have 20%+ deeplinks not handing over properly, whereas the other 80% are ok.

For a publisher about to deeplink with a voucher or after putting the effort into a piece of content they should confirm that hard-won traffic is going to deliver.  This is where Moonpull comes in for publishers’ viewppoint.

In the case of Aesop, via the Pepperjam tracking platform, Moonpull identifies that there is no cookie consent detected though the green 100 tab shows that the cookie was set correctly to track.

With the increasing use of cookie consent technologies, this can become far more complex.

In this example the first tab analysing the initial landing page, shows initial errors with the first party cookie not being set on this first tab. The platform has also identified that the network’s JS tag is not present in the DOM.

The second tab shows that once a visitor has Accepted All cookies, the tab is green, indicating that tracking is successful. That changes again on a page refresh.

This enables a publisher, the advertisers OPM or a network to share a detailed technical fact. This accurate and factual statement can be passed through to the relevant person who can identify the issue and then implement an efficient fix.

Moonpull can help all in the channel, especially for those with compliance, quality assurance roles or obviously those feeling their bottom line is impacted. Why not connect with Moonpull and see how the platform could help your business – Contact us.

We had a number of conversations at the Huddle, which we’ve shared in a YouTube video; read more about that here.

Meet us at more events over the coming year, starting with PI Live and Affiliate Summit West

Moonpull is keen to help all involved in the affiliate industry to have mature and informed conversations about affiliate tracking. Please join in ‘The Tracking Conversation’ on our Linkedin channel:

Join in The Tracking Conversation on Linkedin

Part One: The Tracking Conversation

Part Two: When to Appraise Tracking